Title – Names for the Sea

It isn’t unusual for me to buy a book based purely on its cover, but I can’t recall buying a book before after seeing someone on the tube reading it. I guess that may partly be because I try to avoid the tube as much as possible but on this occasion the woman opposite was reading ‘Names for the Sea: Strangers in Iceland’. I have an interest in Iceland and I thought the book looked intriguing, so without any real clue what it was about (and some issues trying to remember what it was called) I ordered it from the internet.

I was surprised, and am still fascinated, by the cover when I saw it in the flesh – I thought the pinky spots were small flowers – but look closely! This has got be one of the most amazing photographs I’ve seen on a book cover. You can find the cover designer, Anna Green on twitter @SiulenDesign and the photographer is Sandro Santioli – also on twitter @santioli and there is a gallery of his stunning work on sandrosantioli.com.

So to the author and the book! Sarah Moss studied English at Oxford and developed research interests in the literature of the far north and in food and material culture in fiction, specializing in the Romantic and early Victorian periods. She lectured at the University of Kent during which time her first novel was published. She’d visited Iceland with a friend when she was 19 with the intention of returning and then ‘real life’ got in the way, but when a vacancy at the University of Iceland coincided with some events in her life that meant her husband and two young sons were amenable to a move, the perfect opportunity was too good to miss.

The book is the story of Sarah (and her family’s) time in Iceland. Her interview was in November 2008 and their move to Reykjavik began in July 2009. Anyone who has even a passing interest in the news will recognise that this is the height of the financial crisis that gripped Iceland and had consequences around the world. At the time they begin their stay the crisis had halted construction of blocks of flats in Garðabær, a wealthy suburb of Reykjavik but word of mouth finds them an apartment to use, although they are the only ones to occupy the block.

There are two main aspects to the book – one is Sarah’s own experience of her time and being an ‘immigrant’ and the other reflects her own interests and natural curiosity as she tries to find out more about the people and history of the country. Initially the issues are completely practical – where on earth do you get fresh fruit and veg from, what do Icelanders eat? How to get about when you don’t have a car and don’t speak enough of the language to by a bus ticket? Where can you buy second hand things for kids? What is the protocol for getting changed at a swimming pool?

The mix of practical issues and her inability to see the effect of the crash (kreppa) – how can there be no market for secondhand goods in a country in financial crisis? prompt her to find out more about an issue that most Icelanders seem unwilling to acknowledge or discuss but she does persevere to find those who are really suffering.

She shows a journalist’s knack for finding the right people to talk to and finds Icelanders who tell her about the wool and knitting industry (who knew ‘traditional’ Icelandis jumpers were a relatively new thing??), the surprising truth about Iceland’s (apparently low) crime rate, what it was like in Iceland in the mid part of the twentieth century – and of course the hidden people! 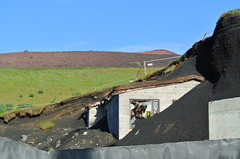 House buried by lava at Heimaey by jkbrooks85 on Flickr

Not all of the writing is investigative – the family want to make the most of their time and manage to travel to some of the popular and lesser knows sites, including a visit to Vestmannaeyjar (the Westman Islands) and the village of Heimaey where houses were buried under the ash during a volcanic eruption 1973 (and which features in Yrsa Sigurðardóttir’s book Ashes to Dust).

One aspect that it would be impossible to ignore is the environment; the climate, the landscape and the seasons which have such a dramatic impact on the length of the days. So how does a stranger survive and make this their home?

I’ve been lucky enough to visit Iceland twice and appreciate that I’ve only scratched the surface of what there is to see and experience but in such a small city there were bound to be places Sarah described with which I was familiar and one of the earliest ones in the book was the Nordic House – home to Iceland Noir! It was fascinating to see the place described through someone else’s eyes.

This is a fascinating insight into the country and its people as well as a (timely) exploration of what it’s like to be an immigrant who doesn’t fully appreciate all the cultural norms of their new home. I should also add that Sarah’s background as a lecturer in Creative Writing and as a novelist means that the book is beautifully written, humorous and absorbing. Whether you’ve only ever dreamed of going to Iceland or have already experienced its pleasures for yourself, this is a great read which I highly recommend.