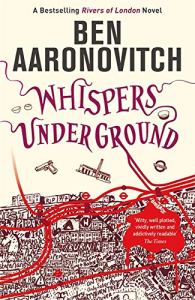 This is the third in the series by Aaronovitch featuring the Police (now Detective) Constable and apprentice magician Peter Grant. I read the second book in the series (Moon Over Soho) in 2014 and leaving a gap of six years has been a bit of a mistake because some of the longer story arc which continues through the series was a bit of a mystery to me – although this didn’t spoil my enjoyment of the book.

Our hero, DC Peter Grant, is called to attend the discovery of a body of a young man at the end of the platform at Baker Street underground station. He’s been included in the team investigating the death because there may be ‘something off’ about it and his special skills may come into play. Grant gets his own role in the investigation, alongside the lovely Lesley, which involves a lot of exploration of the underground tunnels and sewers. The victim was the son of a US Senator so they’re also joined by an FBI agent, although this is not a particularly amicable partnership.

This book has a lot more police investigation in it and less time based at The Folly and Grant’s magical studies than earlier books and only some brief appearances by some of the River folk.

Another enjoyable read in the series. 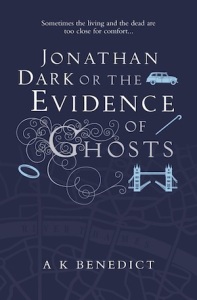 Title – Jonathan Dark or the Evidence of Ghosts

It’s difficult to write a review of this book without comparing it to AK Benedict’s debut The Beauty of Murder because, with the exception of adding a touch of the supernatural to crime fiction, the two books are quite different.

Set in present day London ‘Jonathan Dark or the Evidence of Ghosts’ is a more conventional crime fiction novel than her debut and features the eponymous Dark as a Detective Inspector with the Metropolitan Police. Dark is an unhappy chap – he can’t forgive himself for letting a young woman die at the hands of a stalker and he’s homeless because he and his wife have split up. He has, perhaps not surprisingly, quite a melancholic view of the world.

The book opens when another young woman finds herself at the centre of the mysterious stalker’s attention. In this case, however, she is unable to provide any information to the police as she can’t see. (In fact she was born blind and although she has recently had her sight surgically restored she wears a blindfold as she’s not yet comfortable with sight.) Maria is a fascinating character and her lack of vision provides lots of opportunity for Benedict to draw the world for the reader in terms of scent, sounds and touch.

Dark is also involved in the investigation of a murder in which a body is discovered weeks after the cremation of the victim’s remains has taken place. Finding the key to this mystery uncovers references to a sinister organisation called ‘The Ring’ and this leads him to encounter the supernatural aspect of the story – ghosts.

The presence of ghosts and the London setting brings this more firmly into Ben Aaronovitch / Rivers of London territory but Benedict has her own take on how the ghosts manifest themselves, what the rules are for their presence and introduces a rather malevolent variation.

There’s a lot packed into the book and it felt as if it had more pace than its predecessor. Although you still get a feel for Benedict’s sense of humour (do try to see her talk about her book at an event) there is less of the wry humour that lifted her debut, perhaps Dark’s personality made this less appropriate. There’s still plenty that demonstrates her skill with prose and a trip to Borough Market will never be the same again. The plot twists and turns and there are a number of red herrings thrown in that misdirect the reader (or not, if you’re really smart…).

Dark and Maria are both great characters. He has thrown himself into his work both because of and at the expense of his personal life and through Maria the two worlds collide. Maria seems to be independent and wilful but she has a touching naivety and vulnerability about her. Both are a little lost and even out of place in modern London but they form a bond during the course of the book that adds another dimension.

The plot is a little on the fantastic side of credible (it has ghosts – what am I saying?) but for me the boundary was really pushed when Dark and Maria managed to get drinks at Monmouth Coffee in Borough Market – something I’ve never managed to do!

This book offered quite a different premise to her debut but was an enjoyable and compelling read. Thanks to the publisher for the review copy.

Title – The Beauty of Murder

I’ve been meaning to read AK Benedict’s debut ‘The Beauty of Murder’ since I saw the author at Crimefest in 2014, when she made it sound like an intriguing twist on traditional crime fiction. In writing my review I’m conscious that there are some unusual aspects to the story that if I shared them could be seen as spoilers but it is impossible to give an idea of the book without making reference to some of these. In fact this relates to my post on coincidences.

The setting is Cambridge, specifically ‘Sepulchre College’ and the main protagonist is Stephen Killigan, recently arrived as the philosophy lecturer. Stephen is an engaging character and perhaps, particularly at the outset, quite naïve. Early on in the story he stumbles across the corpse of a missing beauty queen, but when the police arrive at the scene there’s no evidence to support his claim. A ‘disappearing corpse’ is a classic in crime fiction however the explanation for its absence when the police arrive is an unexpected one. The incident brings Stephen to the attention of the local police who have him pegged as either a madman or a murderer.

The book is more of a ‘whydunnit’ than a ‘whodunnit’ and concerns Stephen’s efforts to prove that he hasn’t been involved in any deaths, whilst his nemesis, Jackamore Grass, is undermining him. Grass is a man without conscience and his deeds lie at the heart of the book, but he is not the only one involved in subterfuge.

During the course of the story we see Stephen become a little more cynical and worn down by his experiences, reflecting the trials he endures. This is to the author’s credit, not all crime writers reflect the impact of their novel’s events on their characters. The story is told from three points of view, as well as Stephen and Grass there is also Inspector Jane Horne. Horne has to try to make sense of the unbelievable goings on (this isn’t a world where the fantastic is commonplace) but she’s also dealing with her own issues and these are unexpected, adding an extra emotional dimension to the story.

The plot is well thought out and the mechanics of the more ‘fantastic’ aspects have obviously been carefully constructed. I did get a little lost towards the climax of the story but that may just be the effect of trying to read too quickly! Although a dark subject it’s written with a great sense of humour (think Ben Aaronovitch rather than Jasper Fforde) and I’m always surprised how deftly authors can mix humour and darker content without losing the impact of either. There is a light touch on the (spoiler alert!) historical details, while the writing neatly evokes the different periods.

An intriguing beginning to a series, I’m looking forward to reading more of Stephen’s exploits and where (and when) he next appears. 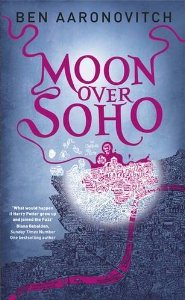 This is the second in the series by Aaronovitch featuring the Police Constable and apprentice magician Peter Grant. The first thing I would say is if you haven’t read Rivers of London (book 1) then do so!

When jazz musician Cyrus Wilkinson suddenly  dies and there is a hint of magic about the corpse, Peter is handed the case. His first step in the investigation introduces him to the whirlwind that is Simone, the dead man’s lover and someone who is soon to be a huge distraction for Peter. Suspecting that the jazz element of Wilkinson’s life is particularly relevant to his demise, Peter uncovers a string of similar deaths amongst musicians. This leads us to find out a bit more about Peter’s background, especially his relationship with his jazz musician father.

This book shares the same mix of action and humour as its predecessor, and as you would expect from the second in a series it allows the characters to develop further. (It also has more adult themes.) The story takes place just a short time after the end of Rivers of London and there are a lot of aspects of the story, especially the characters’ personal lives, which are carried on – so I say again – read book 1 first.

To be honest, in coming to write the review I can remember a lot of aspects of the book – it’s packed with huge array of different elements, but I also struggle to remember how they all fit together. It’s a busy plot with lots of different threads, and of course the magic aspects add another dimension which is absent from more conventional police procedurals. An enjoyable book – but pay attention!

This is the first in the series of fantasy crime fiction set in London and featuring newly qualified Police Constable Peter Grant as the main protagonist.

Left to guard a crime scene Grant is approached by a ghost who was a witness to the incident – opening Grant’s eyes to a world he never realised existed. The story starts off quite slowly as we’re introduced to the characters and the magical background and there are some nice touches as Grant begins to learn magic for himself. The series of gruesome attacks continues apace and the investigation builds to a huge climax – although I have to say that there were times when I wasn’t sure I was completely following all of the action.

There is a decent mystery for Grant to solve which has its origins in the past and this allows Aaronovitch to touch on quite a lot of London history on something of a whistle-stop tour. As well as the plot featuring an evil presence which is taking over Londoners and making them act in unexpectedly violent ways, there is also a thread concerning rival factions controlling the River Thames. The ‘rivers’ theme allows Aaronovitch to explore more of the myths around London and its river.

Grant is an engaging main character, and I do particularly enjoy books written in the first person. His character works well with that of his new boss, Inspector Nightingale, a dapper policeman to whom Grant is apprenticed. They live in the Folly with the mysterious Molly making a charmingly quaint household. I don’t often read this type of fantasy fiction but became completely engrossed in it – if I’d seen magic on my walk through Westminster in a morning I wouldn’t have been surprised!

The book is written with a wry sense of humour which means Grant doesn’t take his situation too seriously even when it seems pretty perilous. There were a few moments that were, if not ‘laugh out loud funny’, at least ‘snigger audibly on the train amusing’. Fortunately the humour lacked some of the corniness of series like Thursday Next.

The way Aaronovitch uses London as the location is brilliant – anyone who lives or works here will know exactly where they are and it was particularly gratifying to see my office’s local pub making an appearance. The link to some of the myths and history of London were interesting and I had to resist the urge to interrupt my reading to find out more.

This was a very enjoyable read – crime fiction with magic, mayhem and myths! You can see another point of review on Notes of Life.