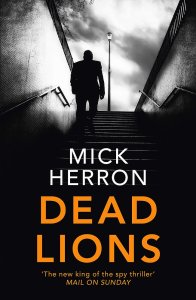 This is the second book in the ‘Jackson Lamb’ series which began with ‘Slow Horses’. I read Slow Horses because so many people had been raving about the series and I did really enjoy it – the mix of dry humour, spies, the weird characters trapped in the dead-end office of Slough House, the London locations I could mentally ‘spot’. Naturally I went on to buy the next in the series and it felt like a huge let down.

While much remains the same (same setting and characters) the story felt tedious. The weird opening with the imaginary cat set the tone. I found the book really slow, despite the fact that all of the background and set up should have been done in the first book. I wasn’t particularly gripped by the plot – an old spy is discovered dead on a rail replacement bus service, alongside an attempt by some of the characters to impress a Russian oligarch. Things felt like they moved very slowly with lots of padding – what I want in a thriller is pace!

One of the parts I enjoyed was getting a better grip on why the characters had been consigned to Slough House. But this wasn’t enough to redeem the book for me.

One of those books where I can’t see why everyone else is making such a fuss. My loss I guess.