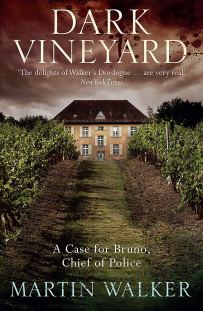 I’m starting this review with a bit of an unrelated moan, but WordPress has been driving me mad of late. I use a Mac and haven’t been able to open WordPress via Safari for weeks. Having established that’s the issue I’ve had to install a different browser and although I have access again I now can’t persuade the browser or WordPress to do any spellchecks. I seem to be spending a lot of time trying to fix things that a few weeks ago weren’t broken and my ‘to review’ pile is just getting bigger & bigger!

But back to the point of this post – my review of the second book in the ‘Bruno, Chief of Police’ series ‘Dark Vineyard’. While I felt that the first book (Death in the Dordogne) wasn’t quite as good as the later books I’ve read, I thought this one was up to the standard I’ve come to expect.

There is only really one mystery that gets this book started and that’s who has set fire to a field of GMO crops – could it be a disgrunted local or an environmental activist? As the investigation into the fire begins a Californian wine producer, Bondino, meets with the Mayor to make a business proposition, one that will change life in St Denis, however he won’t pursue the deal if there is a hint of any futher trouble. The proposal adds a political dimension to the plot, pitting tradition against progress, and Bruno is under some pressure from the Mayor to reach the right conclusion speedily.

As ever, Bruno draws on his local knowledge to take the investigation in the right direction and that puts one of the young men from the rugby club, Max, in the spotlight.   He has strong environmental credentials and plans a future in wine production, he also seems to be a rival for the affections of Jacqueline, a young, Canadian student of wine who has been linked romantically with Bondino.

As the investigation into the fire progresses and the day-to-day life of the town carries on there are two further deaths which while odd aren’t necessarily anything more than accidents, although their timing could suit Bondino who, as an outsider, would make the perfect suspect for Bruno.

Bruno’s love life continues to feature – his ‘on/off’ relationship with Isabelle, as she pressures him to follow her to Paris and a new romance sparks on his doorstep. One of the disadvantages of reading the series out of order is knowing how these things will pan out.

Wine production features heavily in this book – adding to my knowledge from Proof by Dick Francis and more recently All This I Will Give to You by Dolores Redondo (which was excellent & I must write up my review). The book, as with the others in the series, evokes the location – if I ever visit the Périgord Martin Walker will be have to take some responsibility. Bruno also conjours up more of his remarkable meals, the notable one featuring ‘bécasses’ which I had to Google afterwards and are woodcocks (not a dish I plan to order!).

An engaging read with a charming yet fallible lead character, an idyllic setting (despite the increasing bodycount) and some aspirational lifestyles, I do enjoy this series. I note that, jumping ahead, the twelfth book in the series, The Body in the Castle Well, is due out in June.