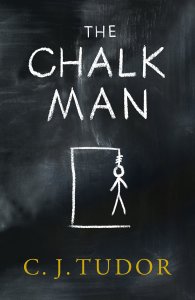 I had heard so many plaudits for this debut that I treated myself to a copy. It’s marketed heavily on similarities to Stephen King but to me it didn’t feel like ‘horror’, which is how most people think of King, it’s more like ‘Stand By Me’ – a coming of age story.

In the 1980s a group of friends are kicking their heels during the school holidays in a small town on the south coast of England. Eddie is one of the friends, now a 42 year old teacher still living in his parents’ house but with the addition of a young female lodger, and is the narrator of the events that took place thirty years previously. He’s received a mysterious letter (and if I’m honest I can’t remember if we ever found out what was in it) which sends ripples through the present and brings to the fore the events that took place thirty years ago. The events took the group from spending their pocket money at fairgrounds, building dens and riding their bikes, to a fractured group who mistrust each other.

Switching between the two timelines we have events unfolding in the 1980s where there is a surprisingly high body count and the present where Eddie is forced to face, and try to unravel, things that the friends hoped they could put behind them.

It’s an interesting way of telling the story, as a reader you wonder at each event ‘is this the one?’ and there are several possible candidates for being the ‘Chalk Man’ so it makes for an intriguing read. Eddie has some problems of his own and you realise fairly early on that he may not be the most reliable of narrators, he certainly is choosy about what he shares with the reader and when. The time slip aspect also gives an interesting feeling about the differences in perception that somewhat naive teens have versus more worldly wise adults. If all this isn’t enough there is also a more touching side of the story as Eddie describes his father’s decline with dementia. As is often the way with debuts, there are a lot of different things packed into the one book.

I liked the characters, you could see how the group would exist as friends and how the personalities fitted together. It’s also interesting to read about them in their school years and then jump ahead to find out what became of them as adults. It all felt very credible and authentic.

I enjoyed the writing and read the book over just a few days but I think there are some aspects where I got swept along with the writing and events may have seemed implausible if they had been given more scrutiny.