Title – The Murder of Harriet Monckton

This book is a departure for Elizabeth Haynes who is well known for her standalone psychological thrillers and her DCI Louisa Smith series. This book is in the same vein as books like Burial Rites and The Unseeing, a fictionalised account of events based on a factual event.

On 7th November 1843, Harriet Monckton, 23 years old and a woman of respectable parentage and religious habits, is found murdered in the privy behind the chapel she regularly attended in Bromley, Kent. The story was a scandal in its time with the suggestions of impropriety in a small town. Drawing on the coroner’s reports and witness testimonies the book follows the events after Harriet’s death and as the witnesses recount the events from their perspective the narrative leading up to Harriet’s death is pieced together.

There are four main characters:- the young teacher and close friend, the young man who walked out with Harriet, the man who offered her spiritual guidance and finally a mysterious man from her past who lives in London. Using the accounts of these four characters and the proceedings at the Coroner’s Court the story develops into a gripping ‘whodunnit. The reader has reason to be suspicious of all four characters but the truth of Harriet’s demise may lay with her missing diary. The discovery of the diary gives Harriet her own voice and perspective. 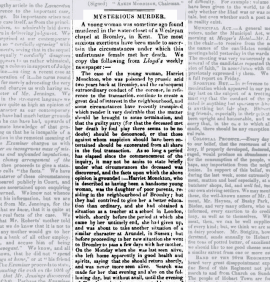 In fact the story takes place over a much longer period than might be expected as
several inquests over a period of years fail to reach a definitive conclusion.

You can see a reference to the events in the National Archives and if you live within striking distance you can go an view them for yourself. News even made it as far as Tasmania with an article appearing in the Colonial Times in 1846.

There is an account in the Medical Times of 1846 from the surgeon asked to attend the body where it was discovered.

As I’ve come to expect from Haynes the book is beautifully written and she captures the feel of the period through her writing, giving it the feel contemporary to the period but not over doing it. The story is a compelling mystery, especially given that there are some factual constraints within which the story had to be framed. The different perspectives that are used to describe the events leading up to Harriet’s death are interesting in themselves – told from each person’s own point of view they aren’t necessarily ‘unreliable narrators’ but they do have their own take on the way events played out. The fact that there were multiple inquests also allows for points of view to change as memories change over time.

The story Haynes tells of Harriet is a sad one but for a young woman who died in unpleasant circumstances, with few people to mourn her, this has given her an interesting legacy.

Many thanks to the publisher for the review copy of the book.