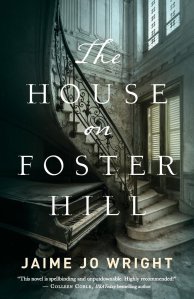 Title – The House on Foster Hill

This is a novel told over two timelines, connecting two women through Foster Hill House. In the present day Kaine is hoping for a new start by moving to an old house, sight unseen, in her grandfather’s Wisconsin hometown. Two years ago her husband died in a car accident and her pleas for the death to be treated as something more serious fell on deaf ears, since then she’s believed that she has been tormented by his killer. When she arrives at the house she finds that it’s long-neglected and needs a lot of work, which she is ill-equipped to do on her own. Feeling very fragile she is quickly befriended by a local woman and through her meets a ‘knight in shining armour’ (who also just happens to be a grief counsellor).

In 1906 Ivy Thorpe is the daughter of the local doctor (who also carries out postmortems) and helps him with the examination of the body of a young woman who has been found dead, her body hidden in the trunk of a tree. Ivy is a bit of an amateur sleuth and is drawn to help in the investigation into the woman’s death which becomes more urgent when it’s discovered that there may be a missing baby. The two timelines connect when Ivy’s search for the baby leads her to the abandoned and menacing Foster Hill House.

The two timelines are told in alternating sections, both with their own mix of tension and conflict. As Kaine’s story develops it becomes clear that there is a stronger connection to Ivy’s story than just the building she is renovating.

One of the first indications that this wasn’t for me was early on when Ivy insists that the unidentified corpse is given a name and she calls her ‘Gabriella’ on the basis that she was now an angel… And that was probably the first sign that religion was going to be a strong theme in this book (I later saw someone describe it as ‘Christian historical and contemporary suspense’). I’ve no problem reading any genre of book where one or some of the characters have a faith and find it important to them but the religious aspects of this book were much stronger than that. This, combined with some quite predictable turns and character developments made for a disappointing read.

Thank you to the publisher for the NetGalley.