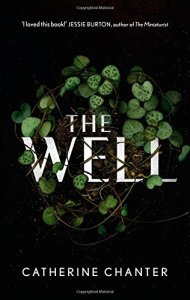 Hard on the heels of The Testimony this is another book that’s hard to categorise. Although there is a more traditional element of crime fiction, The Well is set in a near future where there is some sort of climatic disaster taking place, which puts this on a “semi-post-apocatlytic” footing. Unlike The Testimony, however, there is just a single voice and a single point of view; our narrator is Ruth who has recently returned to her home under a version of house arrest.

Home for Ruth is The Well, a literal oasis in a drought stricken country. Ruth and husband Mark set out to escape to the country from a turbulent time in London. When they chose The Well it was a smallholding like any other in a rural English village. When a lack of rain started to affect the country the change passed them by because The Well seemed unaffected. As their continued ‘good fortune’ alienated them from their neighbours word spread and people arrived to see for themselves. These arrivals included Ruth’s daughter and grandson and a group of nuns the ‘Sisters of the Rose of Jericho’. The Sisters see Ruth as an essential part of their worship and as she becomes increasingly estranged from her husband she is drawn into the women-only group and their religious fervour.

The book opens as Ruth is returned to The Well and her contemplation of the events that brought her there provides the backstory. Gripped by grief over the cataclysmic days that led to her incarceration she doesn’t prove to be a particularly reliable narrator but Chanter manages to hold back the key events from the reader until quite a way into the story. The threads of the story mix together the mystery that surrounds Ruth’s incarceration with the unusual climate at The Well. During her incarceration Ruth is grief-stricken and withdrawn and her interaction is limited to only a handful of characters, meaning that a lot of the story is told as she reminisces on events before the pace picks up when the events reach a climax both in the present and in her memory.

If I were to draw comparisons I would say that this was somewhere between Joanne Harris’s Chocolat and Our Lady of the Forest by David Guterson. There’s a mix of religion and religious fervour that they all touch on with women at the heart of the story. They also mix religion with the unexplained (which of course The Testimony deals with too). Chanter’s prose is beautifully written and evokes the charm of The Well and its idyllic setting.

I found it hard to ignore, however, the occasional break with the fictional setting that had been created (how do you get flowers from a garage during years of drought …?) and the odd anachronistic detail could be jarring – better to not think about the impact on the outside world too much. As with The Testimony the first person approach does mean that the true external impact on the rest of world isn’t really communicated which isn’t always so easy to ignore as a reader – there are some ‘whats, whys, hows’ that could have been answered.

The Well won Chanter the Lucy Cavendish Fiction Prize in 2013, which is for an unpublished debut novel by a woman. Thank you to Peters Fraser + Dunlop for the review copy of the book. 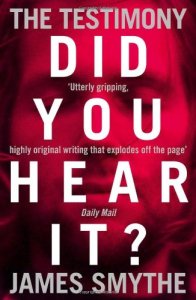 My first issue in writing this review has been trying to decide what genre to describe the book. I know that pigeonholing something with a specific genre isn’t important, but it does provide a clue about what to expect from a book. So thriller – maybe, apocalyptic – sort of, sci-fi – ish, speculative fiction – perhaps. I can say definitively, though, that this isn’t crime fiction.

The book is set in our world, as we would recognise it, but slightly in the future – the clue is that Obama was the American president a couple of terms prior to the events taking place. The story is told, and I’m quoting the blurb here as ‘synchronous events told by multiple voices’. Everyone (with few exceptions) experiences the same unexplained phenomenon. This is the start of ‘The Broadcast’, initially a noise like static which has no obvious source. The unintelligible noise is followed by a voice – but who is it speaking? The premise is that different people, cultures, religions react differently to this voice and have opposing views about its origin. The dividing question is whether or not this is the voice of God. Which makes this sound perhaps a more worthy and dull story than it is.

As the accounts follow from, initially, 26 characters who are a mix of of ages, sexes, cultures, beliefs, locations and occupations there are also a range of reactions to and experiences of the aftermath of the noise and voice. From a British MP to a nun in Rome, from an American schoolgirl to Indian doctor. Whilst individuals reach their own conclusions about the meaning, if any, of the voice, a terrorist promises to punish ‘false believers’. Unrest brought about by the voice is compounded by bombs exploding and an unexplained illness.The combination of events leads to a situation akin to something apocalyptic.

I have to confess that the different voices that all appear in quick succession in the opening and their conversational style took me a while to grasp. The disadvantage of involving such a lot of disparate points of view is that it takes a while to move the plot forward. As the book progresses however, the number of contributors falls until there is a smaller number of core characters left at the end.

I don’t read a huge amount of sci fi (that’s what I’m calling this now) but it seems to be the best genre for exploring issues and this touches on questions about what is religion and what happens if people are forced to confront their beliefs in a more tangible, physical way.

The story is all about the individuals’ experience and their perception of events which provides insight into the events but is still a very personal perspective. Perhaps, though, this isn’t in the book’s favour because this limits the reader’s understanding of the global scale of what is taking place.

All the characters have own way of dealing with the events – religion, science, sceptic, believer and they all seem credible but perhaps in having so many people the book loses something at the heart of it. This was an enjoyable read that raised some interesting scenarios.

I bought this book. You can see other points of view at Reader Dad and For Winter’s Nights. 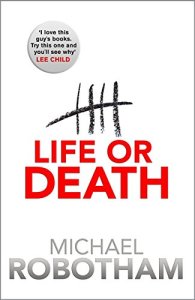 Why is it easy to ramble on about books that you’re not so taken with but when it comes to one you love it’s really hard to articulate the reasons? Or perhaps it’s just me… So this has probably tipped you off that I really enjoyed Life or Death and that I probably won’t be able to get across what it was that made it such a great read.

The premise of the book is a simple but intriguing one, although at first glance it would be tempting to think it’s one that, after a bit of explanation, would be come a run of the mill thriller. The day before he is due to be released after a decade in prison Audie Palmer escapes.

The book opens with Audie making his escape and keeps up the pace as it switches between a number of points of view. He has always been something of an enigma to his fellow inmates, although he has drawn considerable attention as his sentence was related to a heist on an armoured truck carrying $7 million which are still missing. Investigations at the prison focus on Moss, the guy who’s been in the next cell to Audie and the closest thing he has to a friend. But Audie has kept his plans to himself and no-one can shed any light on the reasons for his escape or what he might intend doing on the outside. The points of view include Moss – who becomes more involved in the hunt for Audie than he could have anticipated, and Special Agent Desiree Furness, a diminutive FBI agent, but the story is very much Audie’s. In crime fiction I prefer a single point of view but thrillers work much better when you can follow the hunt as well as the hunted!

As Audie is tracked down by a number of different people his backstory comes out and Robotham is skilful in keeping the reasons for the jailbreak and the story behind the heist under wraps until a pretty long way into the book – which makes it even more of a page turner! The writing has a very visual quality and brings the action vividly alive. There’s also an attention to detail which made me think of the series by David Mark that I so enjoy.

Audie is a great central character, in some ways not a typical criminal or the usual hero for a thriller. He’s been unlucky but has maintained his dignity. The other characters are equally well drawn, especially the FBI Agent (I would have liked to have seen more of her) but Audie is the heart of the story in more ways than one. Although I figured out some aspects of the plot sooner rather than later, there were plenty of aspects that surprised me and plenty of thrills, but it’s a thriller with lots of heart.

You can see another point of view on Fair Dinkum Crime. Many thanks to the publisher for the review copy of the book.