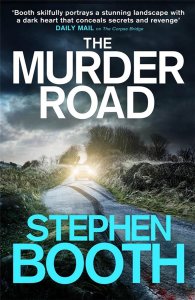 It seems a bit of an oversight in my crime fiction reading that I haven’t read a title by Stephen Booth before, especially when you consider that The Murder Road is number 15 in his Cooper and Fry series. When I mentioned this on Twitter I discovered I seemed to be in the minority and there is a lot of love out there for the series.

This is one of those police procedural stories which starts with a very simple but intriguing premise. A lorry is stuck under a bridge in a Derbyshire hamlet with only one road in or out. The lorry is blocking the access for the residents and when one of them peers inside the cab they discover a trail of blood. When the police arrive there is still no sign of the driver and a full-scale investigation ensues.

The ‘Cooper’ of the series is Detective Inspector Ben Copper – he is leading the investigation into the abandoned lorry / missing driver and also has a new DS thrust on him. Cooper seems to be less cliched then many fictional detectives but from the references to his past things haven’t always been plain sailing. I assume that ‘Fry’ has made more of an appearance in previous titles – here she was a, sort-of, love interest.

The setting is brought to life by Booth and the seemingly simple story has twists and turns as the investigation unfolds. The situation is also a great way of setting up something akin to a ‘locked room’ mystery in the midst of the Peak District countryside. Although the investigative team is supported by a pathologist and teams of SOCOs the story is light on technical detail and relies on more traditional methods and the statements/evidence of those interviewed by the police. In sticking with a small-scale rather than having a sprawling plot or a rampaging serial killer Booth keeps the story credible and absorbing.

I often review series in order and want to tell people whether they will be at a disadvantage or not if they haven’t read the preceding titles. I have to confess, though, that already knowing the backstory does make it difficult to judge. Coming in at number 15 in this series I can definitely say that I didn’t feel I was missing anything that was relevant to the story. Of course there’s lots of background that was, at most, hinted at, but rather than feel I had missed something it was more of an enticement to explore the earlier books.

And books set in the Peak District seem to be a little like buses – I’m not sure when I last came across one but this comes hot on the heels of In Bitter Chill.

Thank you to the publisher for the review copy. I will defiantly be seeking out more in this series and if you’re not already familiar with the books there is a full list, in order, here – http://www.fantasticfiction.co.uk/b/stephen-booth/