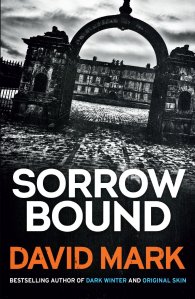 I’ve been enjoying Mark’s Aector McAvoy series, and I received this review copy on the recent publication of Sorrow Bound, the third in the series, in paperback. There’s a lot that is familiar from the preceding books – multiple points of view, a couple of plotlines and a present tense narrative. There’s also Mark’s ability to weave together a number of different threads to the story and keep you guessing all the way.

It’s a scorching summer in Hull (I was reminded of Ed McBain’s Cop Hater) and whilst everyone is suffering in the heat, the giant that is McAvoy is suffering more than most; his mood isn’t helped by enforced sessions with a psychologist following the events of the previous book. He’s therefore keen to escape and put his efforts into identifying the seemingly random murder of a 53-year-old grandmother on one of Hull’s less salubrious estates.

What follows is a police procedural that is more driven by the characters than the procedures, and here Mark excels. That’s not to say that the plot isn’t imaginative and complex. Circumstances conspire to take McAvoy’s boss out of the picture for a while, which leaves him with decisions to make – not something that comes easily to him. What sets McAvoy apart in a fictional world populated by cliched ‘damaged’ detectives who turn to drink (or worse) is that he is straight-laced and not one for bending, let alone, breaking the rules. Were privy to his agonising over which way to turn and Mark really makes you feel for the character.

McAvoy’s wife, Roisin, gets an even larger part in this book, although there was perhaps less of them as a couple. There are also some intriguing insights into their original meeting and some loose ends to pick up in the next book (I hope). If you have read the title preceding this (Original Skin) there is a plotline that carries on from that book – a reward for those of us who are committed to the series!

I’ve seen this described as being the darkest book yet, but I’m tempted to say that I don’t necessarily agree, although the crimes of the main villain are particularly twisted. There’s a large psychological element to the crimes and the criminal, and  these are supported by sound reasoning and explanations woven into the story, not something every writer seems to think the reader needs. Mark also manages to inject some humour into his writing and has a style that I find particularly engaging.

I was (still am) on the verge of saying that this was a ‘five star’ read, but in hindsight I’m a little disappointed in the final ‘whodunit’. I can see the need for perhaps a 4.5 rating! To be fair to this it is probably my favourite read of the year so far.

You can see another review of this title at Crimepieces.