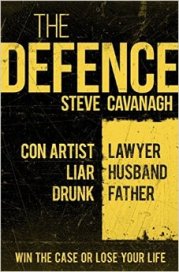 Eddie Flynn is an ‘ex’ – he’s an ex-husband, an ex-con artist and and ex-lawyer. The man pointing the gun at him in the gripping opening doesn’t seem to be aware of any of this. He wants Flynn to get a bomb into a courtroom on the pretext of defending his boss (Olek Volchek, the head of the Russian mafia in New York) on a murder charge. As if the gun and the bomb weren’t enough (not to mention the ex-partner!) they’re holding his ten year-old daughter hostage.

It’s a thrilling opening. He has to defend Volchek on a murder charge in court on the day he is ‘persuaded’ to become a human bomb and the clock is ticking – he only has forty eight hours before the bomb explodes and the Russians leave him to his fate. As Flynn starts by complying with the kidnapper’s demands he draws on the skills he used in the past when he was lawyer and before that a con artist. He’s determined not to let any harm come to his daughter and is prepared to do anything in order to protect her.

The first person helps to draw the reader in and Flynn is a likeable character, I could see something of the TV character MacGyver  in him. Although the plot flies along, the pace was interrupted by backstory and it sometimes felt as if Cavanagh was trying to cram all his brilliant ideas for scams in to the one story.

I can see the appeal in the unusual mix of legal/thriller/scam but the combination was too much for me. Thank you to the publisher for the netgalley. You can see another point of view on Raven’s blog.