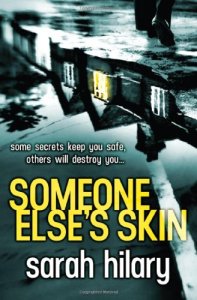 This is one of a handful of British crime debuts which is getting a lot of love on social media sites (alongside Luca Veste’s Dead Gone and Eva Dolan’s Long Way Home).

The main protagonist is DI Marnie Rome – a strong and solitary figure but a brilliant detective. Rome is accompanied by DS Noah Jake when they visit a woman’s refuge to try to secure a statement from a young Muslim woman whom they believe has been injured by her own family. They suspect that the young woman’s brother was responsible for an attack with a scimitar which has severed a man’s arm and need her help in making a case against him. On their arrival at the shelter, however, they walk into the middle of a stabbing – with the husband of one of the women bleeding on the dayroom floor. This unexpected attack gives the plot an additional thread as the detectives try to get to the bottom of the stabbing as well as pursuing the original case they were assigned. Hilary then takes the story in some surprising directions as the plot unfolds.

Like any detective worth their salt, Rome has her share of secrets and has herself suffered loss, in fact she’s seen at close quarters the effect of murder on those left behind. Her background circumstances explain her unwillingness to open up to others, but also provide her sense of purpose and make her unrelenting in her work. Jake is also an unconventional choice of character for a detective and he and Rome make an unusual team.

This is a well-written debut with a strong female lead. As well as delivering a satisfying police procedural the author also brings issues of domestic violence, in all its forms, to the fore.

You can see another point of view on the blog One Word at a Time.  Thank you to Headline for my review copy.