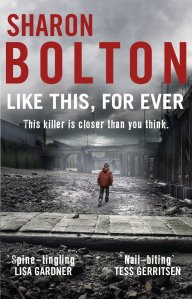 I had already read and reviewed both Sacrifice and Now You See Me by Sharon Bolton when I received this review copy from Transworld. This is the third in Bolton’s series featuring the character of Lacey Flint. I had a few reservations about Flint’s first outing in Now You See Me, and missed out on reading the sequel, Dead Scared. Skipping  a book in a series can be a problem and although there are a few oblique references to “what happened in Cambridge” that kept most of what I missed as a mystery, there was  enough to make clear the current situation with Flint and her colleagues.

The story surrounds the abduction of young boys whose bodies are subsequently found close to the Thames. Despite this being a potentially very dark, perhaps even taboo subject, Bolton manages to keep away from any possibly disturbing imagery yet conveys the fear that this creates in the community, and the pressure the Police are under to solve the case.

Bolton introduces us to a new character – Barney – an eleven  year old boy who has an unusual ability to see patterns that the rest of us would miss, and a habit of having blackouts when he can’t remember what he’s done. He and his group of friends are the ideal target for the killer but instead of staying safely indoors when he is left to his own devices by his father he takes on the role of amateur sleuth.

Following “what happened in Cambridge” Flint isn’t currently working with the police but is receiving counselling.  Despite her best intentions she becomes drawn into the case, acting as something of the “maverick detective” but her reluctance is genuine as is her exclusion from the investigation!

I started by suspecting everyone, then Bolton gave me cause to narrow my suspicions, but never in an obvious way. Suspects came into view and then I discounted them, only to suspect them all over again. I have to confess that I didn’t get “whodunit” until the very end – and was kicking myself for missing the very carefully placed clues. For me this is the real key to what sets this apart from other similar books I’ve read recently.

This is a great example of engaging and gripping crime fiction. Flint has her own demons to face but is becoming a more rounded character who is easier to sympathise or empathise with than before. The relationships between the main characters (Flint, Joesbury, Tulloch) continue to develop, but never at the expense of the pace. Bolton injects some great tension into the story, especially in the opening chapter, and the pace ebbs and flows through the book as the investigating team track down their suspects. Personally I also appreciate the London setting, and the City is one I recognise more than perhaps darker books like Hanna Jameson’s.

There are a number of bloggers who can be effusive about every book they review – either not reviewing anything that they can’t give a glowing review to, or just praising everything they read – but when something comes out that’s better than the last book they read they have nowhere to go. So I am pleased that I only rated Now You See Me as a 4/5 because I can say without a shadow of a doubt that this is a 5 star read and the best thing I’ve read in 2013!