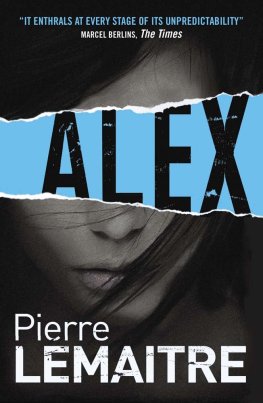 This is a book that I had seen mentioned and positively reviewed by those whose opinions I respect but yet I knew nothing about. Luckily I was given a copy by Sarah at Crimepieces and it went to the top of my TBR pile. It soon became apparent that the reason that I had seen very little about the story is that it’s impossible to review in any detail without giving away some aspects that any responsible reviewer will know should be kept for the reader to discover! But here goes…

Alex is a stunning young woman who makes heads turn, she seems to be a bit of a loner, and a little lonely, but someone with the confidence to eat in a restaurant on her own in the evening. Alex suspects that she’s being followed, but the suspense doesn’t last long because by the end of chapter one she has been brutally attacked and abducted.

As it happens there was a witness to the kidnapping and the police are quickly mobilised. The detective assigned to the case is reluctant to become involved as he’s still getting over the trauma of his own wife’s kidnapping and subsequent murder. (This made is seem as if I was reading a translation of the second book in a series, but I have been unable to find out if this story was the subject of an earlier book.) The detective is Commandant Camille Verhoeven, a diminutive character who has his own unique style of investigation. He had a breakdown following his wife’s death and while the case brings back terrible memories it also reunites him with colleagues from whom he has been estranged for some years.

We follow both Verhoeven as he tries to trace the kidnapper and discover the identity of the victim, and Alex as she undergoes a harrowing ordeal at the hands of her mysterious abductor. And the ordeal really is extremely distressing. While there is some violence the attack is as much about degradation and dehumanising her. But appearances are deceptive and Alex is no ordinary victim, but a resilient and resourceful young woman.

I also enjoyed the characterisation of Verhoeven and his colleagues, as they return to working together, and the dynamics of the group make an interesting counterpoint to Alex’s story and can occasionally provide some lighter moments.

The book is divided into three parts and I really don’t want to give anything away, but it is worth persevering with the aspects that make unpleasant reading because the story really is incredibly cleverly told and worth sticking with until the very last page.

You can see another review at Raven Crime Reads.